This is the next post in the reactive examples series. Previous articles focused on building a MVVM-style ReactiveUI-based Windows application in C# with the help of Reactive Extensions. The example application had some simple word counting logic and a background ticker, demonstrating an implementation without using error-prone callbacks or explicit threading. This article will try to re-create the same application for the web browser using Vue.js, Bootstrap-Vue and vue-rx.

After several attempts to implement the example with RxJavaFX, I gave up on RxJava for a UI, and focused on another approach to writing concurrent reactive software: the Actor Model. This lead me to converge on two* Actor Model languages, Pony and Elixir/Erlang, and later, on one framework: Vlingo (thanks to a serendipitous meeting and a kind invitation to an IDDD workshop by Vaughn Vernon).

The venture resulted in several presentations, including one at the Lightweight Java User Group München Meetup. In the preparation for the meetup, I have demonstrated how Reactive Extensions can enhance actor model code with time-based operators, and how the transition between the paradigms is achieved (see vlingo_experiments/batching_with_rx).

As late Pieter Hintjens said and wrote, alluding to Conway’s Law, “read about the Actor model, and become a message-driven, zero shared state Actor”. The 1973 paper by Carl Hewitt and others on the Actor Model was published in proceedings of an artificial intelligence conference of the time. There are good indications that this concurrency model is a good fit for a computational model of the brain (see 1, 2).

All this deserves another series of blog posts.

The Actor Model is coming to the browser too: it is a natural fit for the modern web. See the talk: Architecting Web Apps – Lights, Camera, Action! (Chrome Dev Summit 2018) and the related Github project: PolymerLabs/actor-boilerplate. It has been seen in other places too, such as in the emerging framework Tarant.

Alas, I can’t show an actor model example in the browser, yet. Thus, back to Reactive Extensions!

How to get to vue-rx?

It seems, in the world of web front-end programming, there are numerous diverging paths, all of which, in the end, converge on downloading half the internet of little script files in various dialects of JavaScript. But don’t despair, commit often and small. I am not native to the JS world, and previous attempts to re-create the example in the browser failed miserably.

The path chosen here is to start with a boilerplate generated with Vue CLI 3.

Install the dependencies via npm install: 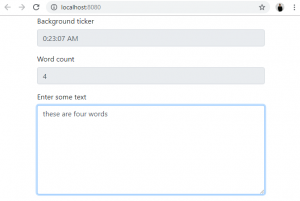 which is a simple form with two read-only text fields, and one input text area, all declaratively bound to the viewmodel via the v-model directive

The dependencies must be registered with Vue in the <script /> tag in order for them to work together as intended (excluding some CSS/other boilerplate):

The following is all of the ViewModel with the explanations in the comments:

Reactive Extensions have proven to be a suitable paradigm for building reactive user interfaces, landing them on the Thoughtworks Radar into the Adopt ring. Rx implementations can be used in variety of technologies, as the Reactive Trader project has shown.

While the Actor Model shines on the server, reactive, message-driven technologies play well together, and, perhaps, soon it will be natural to structure applications as a mix of stream-based and actor-based components. 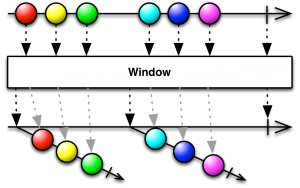 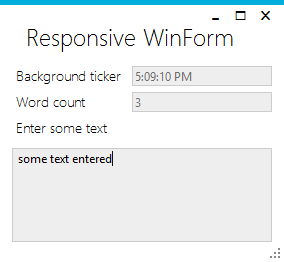 This is the next post in the series, looking first at Reactive Extensions (RX) to simplify writing Windows Forms UI logic, then using a viewmodel shared between a WPF gui implementation and a rewritten WinForms version using ReactiveUI, stopping at a short article on testing the viewmodels.

ReactiveUI API has been quite volatile for the last year, and this series is in need of an update[0. See ReactiveUI Design Guidelines]. A CodeProject author gardner9032 published a nice teaser article, showing the ReactiveUI mechanism for writing simplified Viewmodel-View bindings [1. see article @CodeProject], which serves as primary trigger for this post.

There’s plenty of news and updated articles on Paul Betts’ log, providing a good resource for updates on the API. Phil Haack’s blog is also a superb resource for explanations and commentaries on the use of ReactiveUI in real-world applications.

The ReactiveUI project is quite active, as the community seems to have grokked the jist of it, while the list of supported platforms has become more than convincing.

Getting rid of events

The enabling feature of ReactiveUI is writing declarative UI glue code, and if the viewmodels are based on Reactive Extensions, then declarative C# style can be used throughout the project. The previous ReactiveUI Windows Forms examples converted an event sequence into an observable sequence of values. In this example, that will be accomplished conveniently by the ReactiveUI WinForms lbrary. The viewmodels also contained some imperative code. For this article, the viewmodels will not be reused from the previous articles, but written from scratch.

The viewmodel’s task is the same: something is ticking in the background, while words are counted in the input text asynchronously, and the calculation is throttled to 0.5 seconds. The viewmodel boilerplate is simplified using ReactiveUI.ReactiveObject.

The constructor of the viewmodel receives an IScheduler for scheduling on the correct thread, and an IObservable, which will be a stream of input from the view. Observe the ToProperty helper:

Word counting logic is implemented in a similar fashion by transforming the incoming stream of strings.

To remove yet more boilerplate code, WinForms Form specialization implements the ReactiveUI.IViewFor interface. This allows for largely simplified run-time and compile-time checked bindings, avoiding using strings for property names. The implementation is straightforward, and pays off once the views become more complex than this example:

None of the controls in the designed WinForm have wired events or bindings set from the designer. The glue code is reduced to instantiating the viewmodel …

… and declaring the bindings[2. The ReactiveUI WinForms implementation seems not to support fully read-only fields using default bindings yet, hence an empty setter in the viewmodel] [3. The scheduler is from Windows Forms helpers].